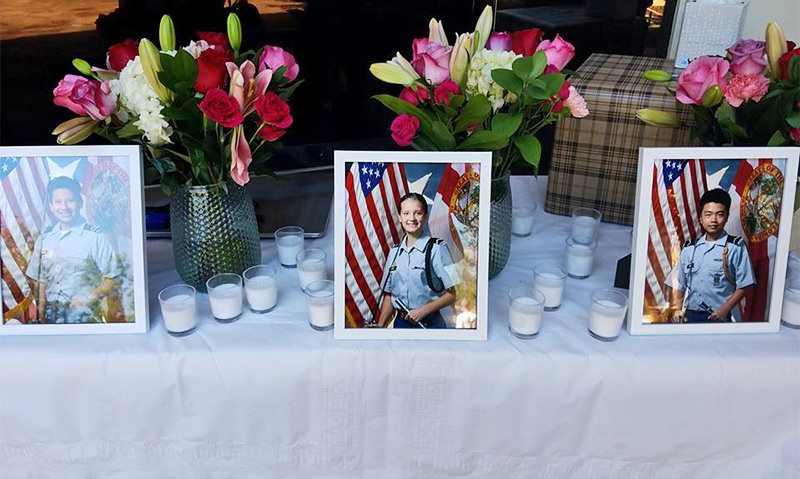 ‘It really breaks your heart’

For 15-20 years, Legionnaire Loretta Young has worked with the Junior Reserve Officers’ Training Corps program at Marjory Stoneman Douglas High School in Parkland, Fla. She calls the JROTC cadets the best of the best and a source of pride for nearby Arthur R. Lanni Memorial Post 365 in Sunrise, which sponsors the school’s JROTC program.

But on Feb. 14, pride turned to sorrow when three of the school’s JROTC cadets – along with 14 of their fellow classmates and teachers – were gunned down by a former student at the school. And six days later, Young and hundreds of other mourners gathered at Kraeer Funeral Home in Coral Springs to say goodbye to one of those students, 15-year-old Peter Wang.

One week after the loss of Wang and fellow JROTC cadets Martin Duque and Alaina Petty, both 14, Young still was having trouble verbalizing how emotionally difficult the past week has been.

“It really breaks your heart,” Young said. “Really, I can hardly describe how you feel when you work closely with them, when you see them on a regular basis. You admire all that they do. And then to know that their life is gone, I can’t even put it into words.

“We shouldn’t have to go see them put in the ground and to see their families so heartbroken. I’m a mother, so I know.”

Young, the longtime commander of Post 365, has seen the benefits of the JROTC program as both the Department of Florida’s JROTC and Shooting Sports chairman, and as a member of the staff at the Legion’s 3-Position Junior Air Rifle Championship in Colorado Springs, Colo.

“They work very hard,” Young said. “They are the cream of the crop when you speak about the JROTC cadets and their instructors. They are shining examples of what our youth is and what we have to look forward to as a country. To lose any one of them is devastating.”

Post 365 members attend the school’s JROTC events as often as they can, as well as sponsor year-end award ceremonies for military and scholastic excellence. Young recently had met with school officials about the JROTC’s formal inspection program, which was scheduled for the day after the shooting. Young said the formal inspection program, which only takes place every few years, is a “shining example of what the cadets are.”

An Air Force veteran, Young had visited Marjory Stoneman Douglas High School a few weeks ago to prepare for the awards ceremony and had shaken Wang’s hand. And the day of the shooting she spoke with the school’s curriculum advisor.

“I was hanging up saying ‘I’ll see you tomorrow morning at the inspection,’” Young said. “To hang up the phone and then look and the see the school on the news … I was speechless. It’s devastating.”

After their deaths, the U.S. Army presented all three cadets with the Medal of Heroism for the danger and extraordinary responsibility they took on during the shooting. Fellow students said Wang was holding a door open to allow others to escape when he was gunned down.

And the U.S. Military Academy, which Wang had hoped to attend, posthumously admitted the slain youth to the institution on the day of his funeral.

Young, who is a member of U.S. Rep. Debbie Wasserman Schultz’s service academy nomination committee, said the posthumous honors are a good way to honor the three teens, but it doesn’t take away the pain of knowing all three are gone.

“It is a nice recognition, and it is nice that West Point did that for Peter,” she said. “But it doesn’t diminish the fact that I saw a 15-year-old lying in his casket in uniform that I only saw a few weeks ago. And he’s gone forever.”